Dinner with Friends: A Day with KP's Fine Meats 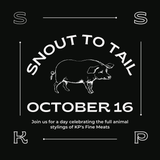 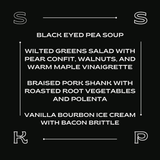 Sold Out
SKU:
Add to Cart

Join us for Dinner with Friends. Not only are we collaborating with KP of KP's Fine Meats on this menu, but he and our farmer friend Kyle Smith of Smith Poultry will be joining us to talk about sustainable farming and eating locally.

This menu is all about different application of this beautiful pasture raised guinea hog from Neigbor's Farmstead in Phoenixville that are finished with yogurt and apples. We'll start with black eye pea soup utilizing a fortified pork stock. Next we'll get into a classic French preparation by doing a pear confit with rendered fat from one of the later dishes to go with a wilted greens salad. Our main course will feature a good ol' braised shank with polenta. Not to be left out on the fun, dessert will is bacon brittle topping on vanilla bean and bourbon ice cream. You have the option of bringing your own bottle but some NA beverage will be available.

We'll be having two seatings. One at 1pm and another at 630pm and seating will be al fresca weather permitting at a secret location in Philly.

We would like to also offer variable pricing for those that need it. Tickets are available for as low as $35.

Get in while you can!!

Head to toe butchering and cooking isn't anything new, although it has gained popularity the last few years. It is in fact how many cultures cook in order to maximize the resources available tot hem. Indigenous North American cultures and African Diasporic cultures in particular adopted the practice because meat was not a commodity they could afford to waste. In the US specifically, it was how slaves had to cook because they were given literal scraps.